The following white paper was written during our first attempt to do this project for the people of Lake County, California following their massive 2015 wildfires.

3 Phases Of Disaster Sheltering and the Sharing Economy

This is a hastily penned 2015 “white paper” from our founder, winner of an international “Best Security Idea of 2008” award for a rapidly deployable relief sheltering venture. It is based on months studying the strategies and tactics used by disaster relief agencies worldwide, considering technological solutions, and filing multiple patent applications covering sustainable sheltering approaches (since released into the public domain). We hope the information here provides some perspective about the role of RVs in disaster response to all stakeholders involved, including Local, State, and Federal decision makers.

Post-disaster sheltering can generally be broken down into three phases, regardless of disaster type or location in the world:

The emergency response stage is by nature miserable, but tolerable if short-term. In many instances, it is not short-term because transitional shelters tend to look like long-term installations to fearful decision makers or land owners. Often, land rights, lack of material, utility infrastructure limitations, money, and politics delay transitional shelter until permanent shelter construction can scale. The pre-disaster local planning “not in my neighborhood” mindset often continues long into the transitional stage. And this happens everywhere in the world! It might be human nature.

Since any shelter that appears long-term faces so many barriers, the transitional phase often falls short, if measured as “misery is greater for longer than it might have been” rather than numbers of people sheltered. In the developing world, initial tents at evacuation camps are typically replaced with new tents or cardboard as they deteriorate, so there is no meaningful transitional shelter at all and the evacuation camp becomes a refugee camp. This leaves people helpless, fearful, and dependent on “temporary” camp settings for a long time – in some instances, forever.

In the US, 100x more dollars per displaced person are available, and top-down decision-making/funding tends to result in large encampments of FEMA trailers or the like during reconstruction. A world apart from cardboard shacks, but they still feel like upscale evacuation centers, with the occupants dependent on government.

There is nothing wrong with this and we are not criticizing but observing – it seems the only way large government agencies can possibly solve the problem at scale for large numbers of people. In that respect FEMA’s approach beats any alternative known to man (or woman). American disaster victims quickly receive better shelter than 2/3 of the world has when there is no disaster.

But times change, technologies change, new ways of doing things emerge, and if they are useful they grow. Today we have entered a “sharing economy”, characterized by AirBnB (shelter) and Uber (mobility). The former “disrupted” the hotel industry, while the latter “disrupted” the taxi industry. RVs Without Borders is a sharing economy crowdsourcing EXPERIMENT to explore a similarly disruptive approach to transitional sheltering following disasters – instead of FEMA camps, we envision transitional housing to be one borrowed RV at a time, matched with one family, parked in the driveway of a relative, neighbor, or friend, and plugged into an existing electric outlet, hose bib, and plumbing clean-out.

The goal is to complement FEMA’s top-down centralized camp/support approach with a bottom-up, grass roots alternative focused on providing greater self-sufficiency to one family at a time, and greater resiliency to the entire community if many people participate. With 18,000,000 private RVs registered in the US, even 1% participation long-term would make crowdsourcing a significant solution vector. This experiment aims to test that hypothesis.

By connecting RV owners directly with individuals in need who then find locations for their transitional shelter within their community, we hope to enable more disaster victims to transition among friends and family in familiar surroundings, instead of in institutional camps or geographically dispersed. We envision RV use beginning in a friend’s driveway, and transitioning to the RV user’s burned property after toxics are cleared to support reconstruction.

We are doing this because we care, not for commercial gain. We believe our approach can help restore and sustain communities more powerfully than what exists today, at least by a little bit. We hope all stakeholders involved in response, transition, and reconstruction after disasters will consider how this might be made true for a while. And then, when reconstruction is complete, this too shall pass… 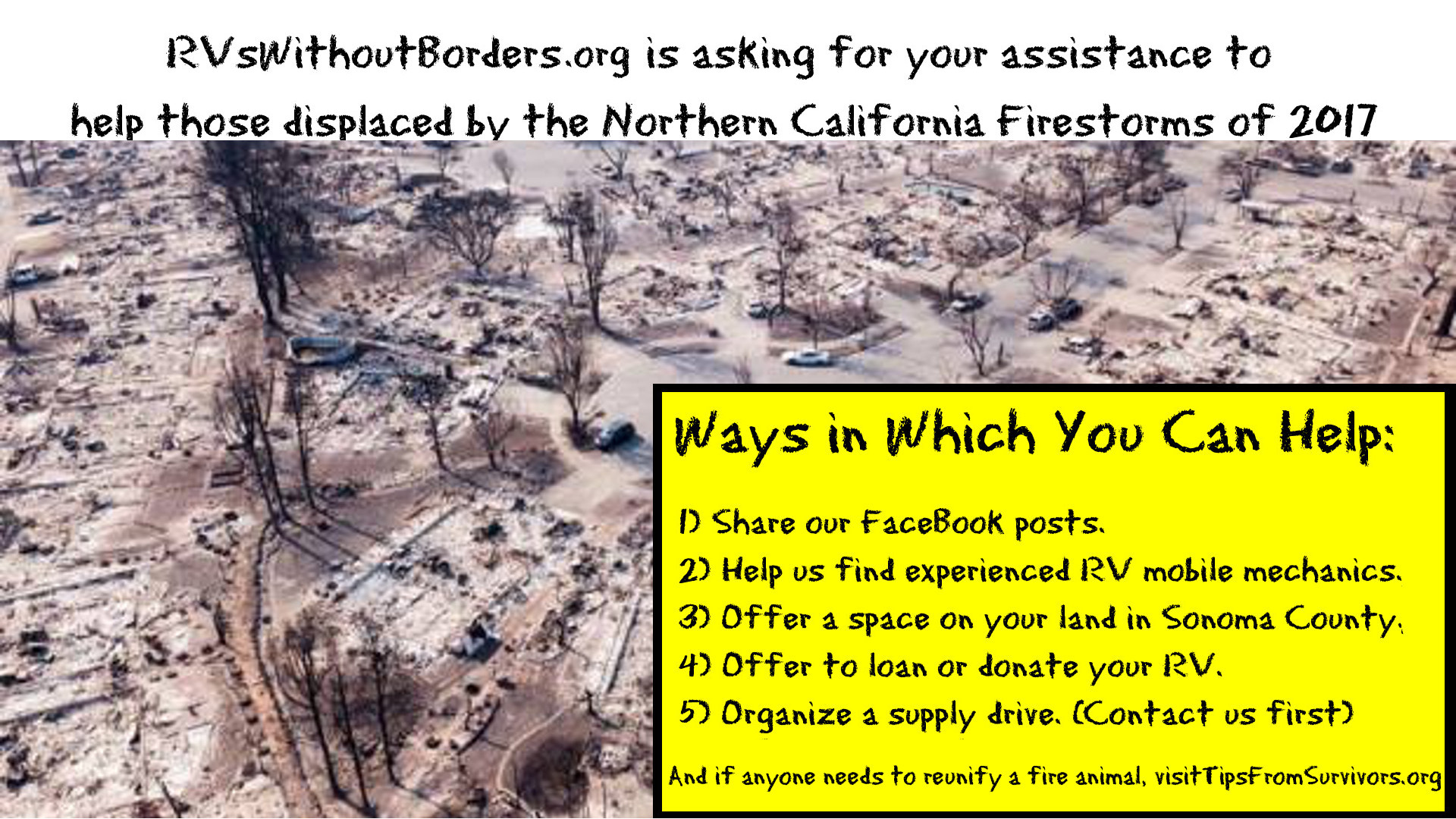 Ways in Which You Can Help

Can we please enjoy the spirit of Christmas every day? 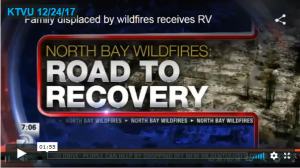 Click here to learn more. Thank you to our friends of RVsWithoutBorders for making this project possible.